NOTE! ONCE UPON AN ALBATROSS… (2008-2012) is a retired blog that's no longer being updated. Please read the current blog. 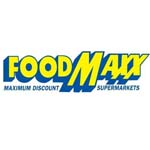 After the Parkmoor post office moved around the corner and a Savers Thrift Store opened, that wasn’t the only major change at the Parkmoor Plaza shopping center this summer. FoodMaxx underwent a major renovation that dramatically improved the store, including new shelving, an open floor layout and self-checkout stands.

The biggest change was eliminating the herding pattern that forced customers to go from the front entrance through the produce department along the left wall, the meat department along the back wall, and into the rest of the store from the right wall. I don’t think that floor layout ever made sense even when the store was previously known as Food-4-Less. With the separate entryways consolidated into a new entryway at the front center of the store, you have access to the entire store when walking in. I still find it difficult after 20 years of shopping there not to follow the old herding pattern.

The warehouse-style shelving was replaced by what I like call to Safeway-style shelving, which is a uniform beige shelving at average height. The new floor layout has wider aisles between the shelves and a central aisle going straight down the middle. The downside is fewer shelves with a smaller product selection (some cut in half). The produce department was expanded to include organic fruits, vegetables and sushi.

All the checkout stands were replaced by new stands that are slimmer, sleeker and modern looking. Like the old floor plan being abolished, you have to get used to the new orientation of the stands with the clerk on your right instead of your left. The stands have padded knee switches to move the conveyor belt when you bag your own groceries (that haven’t changed). I can’t help but notice that there are fewer stands in a smaller space than before. I’m no longer seeing familiar faces, which leaves me to wonder if they retired or were laid off to pay for the new improvements.

The store now has four self-checkout stands near the exit. The computer voice for these machines are identical to the self-checkout stands at Safeway, making me wonder if FoodMaxx bought everything from a Safeway warehouse fire sale. The machines behave the same way except the voice doesn’t ask for your Safeway discount card and dispenses cash in $10 USD bills instead of $20 USD bills (useful if you want to spend less cash at other stores).

The self-checkout stands are available during daylight hours and are blocked off a night to prevent people from running out the door without paying. Although that doesn’t prevent anyone from surreptitiously walking out the entrance with a bottle of vodka, which happened one night when a teenaged girl brushed past me.

The one thing that haven’t changed despite all the new improvements is the long lines. If you’re in a hurry to shop, FoodMaxx is the last place to be shopping at. It’ll be interesting to see if the lines will snake down the central aisle during the holiday season.