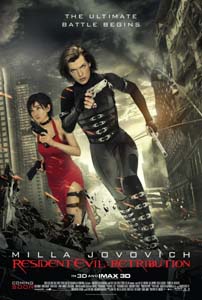 I kept my expectations low for “Resident Evil: Retribution,” the fifth movie in the zombie/chic flick series, by not reading any of the reviews before seeing it at the Vallco Shopping Mall. I was pleasantly surprised by how different this movie was even though it covered the same zombie-infested territory of the last four movies.

The opening sequence has Alice (Milla Jovovich) plunging into the ocean, as if embracing Death, and then everything runs backwards in slow motion as explosions disappear, bullets weren’t fired and people didn’t panic as attack helicopters from Umbrella Corporation (UC) disappear over the horizon. Alice introduces herself in a virtual video screen, recaps what happened from the previous movies, and the attack sequence resumes at normal speed as the ship with escaping survivors is destroyed.

Alice wakes up in bed as if everything was a bad dream, realizing that she has a husband and a young daughter to get ready for the day. This domestic bliss is soon interrupted when a zombie breaks into the kitchen to attack her husband. Being a normal woman with maternal instincts, she grabs her daughter to escape through the attic and out into the street to find the Raccoon City neighborhood under attack from zombies. Rain (Michelle Rodriguez as a gun-adverse neighbor, later reprises her role as a military hard ass) drives by to pick them up. The car crashes after being hit from behind by a truck. Alice and her daughter escape to another house, where she attacks a zombie for threatening her child.

Alice wakes up again in a UC prison cell and being interrogated by Jill Valentine (Sienna Guillory), wanting to know who she worked for. A nonsensical question. A high pitch sound renders Alice in pain for failing to answer. This goes on until a power outage unlocks the door and opens a secret compartment with body armor and boots that fits her perfectly. Escaping from her cell to the outside world, she finds herself in downtown Tokyo and watches as a dazed Japanese woman suddenly attack a business man to start the zombie outbreak.

She runs into Ada Wong (Li Bingbing), who explains that they are inside the UC facility underneath an old Soviet submarine base in the frozen Arctic Sea. The facility is divided into zones that represent Tokyo, Moscow and Suburbia, where the Red Queen—the homicidal artificial intelligence from the first movie—run simulations to improve the biological agent responsible for the zombies. As a strike team infiltrates the facility from the outside, Alice and Ada try to rendezvous with them to escape.

I loved how everything from the previous movies is put into doubt. It could be nothing more than an elaborate simulation by the Red Queen. Even Alice is unnerved by how far UC would go when she finds the dead body of her domestic self and a daughter clinging to her in the Suburbia zone. Although without her superpowers from the zombie virus, maternal instincts fuel her thirst for retribution.