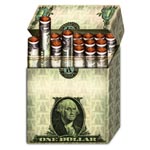 I voted for Proposition 29, a new $1.00 USD per pack cigarette tax, which was narrowly defeated after being too close to call for two weeks after the election. Being a non-smoker who grew up in a family of smokers in California, I had nothing to lose and everything to gain if society has fewer smokers. Not surprisingly, the tobacco industry spent $47 million USD to defeat the proposition. (That’s $11 million USD more than what Governor Jerry Brown spent on his campaign in 2010.) Don’t be surprised to see another cigarette tax on the ballot again in the near future.

The first election after I turned 18-years-old had Proposition 88, a $0.25 USD per pack cigarette tax, on the ballot in November 1988. I voted yes because I wanted my father to quit smoking. He started smoking when he was 15-years-old and smoked for the next 30 years. (He and his brothers used to drive from Idaho to buy untaxed cigarettes in Oregon and sell them out of the trunk of their car in Southern California during the 1950’s.) After Proposition 88 passed and the new cigarette tax went into effect, he couldn’t see himself paying $20+ USD per cartoon every other week. (It’s $40 to $50 USD per cartoon today.) So he quit smoking and chewed gum until he kicked the habit, living another 30 years before he died from lung cancer last month.

Perhaps it was good thing that the cigarette tax was defeated. Our enlightened leaders in the legislature borrowed money against the tobacco settlement fund to plug the holes in the state budget in 2003. Higher cigarette taxes mean lower cigarette revenues, which means that the state will have to cover the bond repayments out of the general fund. Another ticking time bomb in the state budget that will hit taxpayers sooner or later. Seems like you can’t improve public health without shooting yourself in the foot at the same time.