NOTICE! KICKING THE BIT BUCKET (2013-2016) is a RETIRED BLOG that is no longer updated. Return to main site. 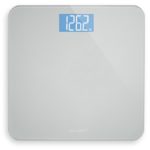 I’ve always told people I weighed 350 pounds for the last ten years despite working out at the gym and being on a low-carb diet. That wasn’t entirely true. The analog scales at the gym maxed out at 350 pounds and thunked past 350 whenever I got on. The thunking stopped three months ago. One scale said I was 345, another scale said I was 335. It didn’t help that different scales couldn’t agree on the same number. So I got a digital bathroom scale that maxed out at 400 pounds. My weight ten weeks ago was 370 pounds. Today, it’s 360 pounds.

Analog bathroom scales in the past maxed out at 200 pounds. Since I typically weighed less than twice the maximum weight, I have never bothered to get one for home. Every once in a while a digital scale that maxed out at 400 pounds appeared at the gym. Everyone, of course, wanted a more precise number than what was possible with the analog scales. It didn’t take long for the digital scale to become uncalibrated and then broken from the constant use. The gym wasn’t planning on getting another digital scale any time soon, so I needed to get my own to monitor my weight more closely.

I ordered the Greater Goods Basic Bathroom Scale for $20. This model doesn’t have Bluetooth. I’m not even sure why anyone would have a Bluetooth-enabled scale. Might be worthwhile if an app had weight-specific commentary, say, “Oh, God, not again!”, where John Hurt reprise the chest buster scene from Alien in Mel Brooks’ Spaceballs. The one thing that surprised me the most about this scale that it was thinner than the current generation of the Apple MacBook Air. I expected to find a “Design by Apple in California” sticker on back. With a firm foot press on the center of the scale, it turns on and calibrates to zero. The white numbers on a blue background is very bright in the early morning hours.

My weight ten weeks ago was 370 pounds. It took a month of daily weighing to convince myself that the initial number was accurate and my subsequent weight loss of four pounds that month was real. I lost another four pounds last month and two more pounds halfway into this month. I now weigh 360 pounds after ten weeks. I’ve been told by a coworker who is a martial arts expert that losing one pound per week is a sustainable goal (see update below). My lowest adult weight was 325 pounds when I rode a bicycle 100 miles per week for three years. If I continue losing weight at this rate, I’ll be 325 pounds in January 2018.

Updated Monday, 24 July 2017: Not surprisingly, my critics went from “your diet and exercise program doesn’t work” to “you’re not losing weight fast enough” in their perpetual whining. In their warped minds, I’m a butter ball who should lose 10+ pounds per week. I did that over 30 years ago when I got a ten-speed bicycle for my 16th birthday, rode all over the county, and lost 70 pounds in one summer. I’ve ridden a bicycle for 20 years and worked out in the gym for the last 10+ years. My adult weight varied from 325 pounds (bicycle) to 375 pounds (weight training). I’m happy to lose one pound per week and watch my stomach shrink.

One critic challenged my coworker’s statement that losing one pound per week was sustainable. According to the Center of Disease Control (CDC):

It’s natural for anyone trying to lose weight to want to lose it very quickly. But evidence shows that people who lose weight gradually and steadily (about 1 to 2 pounds per week) are more successful at keeping weight off. Healthy weight loss isn’t just about a “diet” or “program”. It’s about an ongoing lifestyle that includes long-term changes in daily eating and exercise habits.

Like everything else with my critics, they will continue to whine because they have nothing better to do with their lives.