NOTICE! A SILICON VALLEY WRITER (2008-2016) is a RETIRED BLOG that is no longer updated. Return to main site. 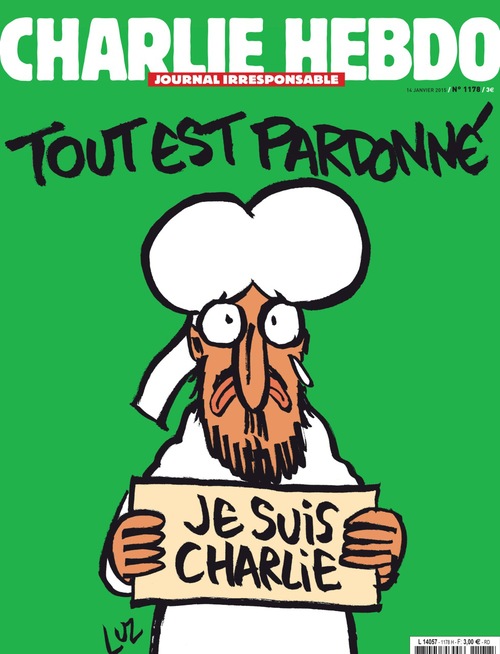 On Wednesday, 7 January 2015, two Islamic terrorists stormed the offices of Charlie Hedbo, a French satirical newspaper that has in the past published cartoons of the Prophet Muhammad, sparking a three-day reign of terror that ended with a dozen people dead. This attack on free speech failed to intimidate the survivors of the newspaper. The next issue came out the following week with the Prophet Muhammad holding a sign that “Je Suis Charlie” (“I Am Charlie”) on the cover.

As a writer with a Christian background, I believe that free speech and freedom of religion goes hand-in-hand. You can’t have one without the other. Unfortunately, too many religious people take their religion too seriously by making every little detail a life-and-death struggle. Stepping back from something absurd and laughing with God is impossible for them. It’s easier to take offense and shoot down free speech. Without of freedom of speech, there’s no freedom of religion. No democracy can survive without having both.

As a young teenager, I read “Job: A Comedy of Errors” by Robert A. Heinlein, a satirical novel about a modern-day Job who suffers a series of misfortunes through alternating realities. The novel ends with revelation that Job suffered because Jehovah (Christian god) tried to welsh out of a bet with Odin (Norse god), which a higher authority had to settle after Satan intervenes to right the wrongs against Job.

I haven’t read the biblical account of Job until I became a Christian ten years later in college. The Heinlein novel became funnier to me after I became familiar with the source material for the story. Neither the words “bet” nor “wager” appears in the Bible, but that was what God and Satan were doing by tormenting a righteous man to see if he would turn away from God. Most Christians believe this story was about mankind being righteous to the end no matter what happens in life. I always believe that this story said more about God than mankind.

Most Christians lack the capability to have an honest discussion about God if it challenges their literal (or absolute) perceptions of the Bible. When the ministry did a series of lessons on the Book of Job, no one wanted to hear about the Heinlein novel or consider that God might welsh out on a bet. Some people took offense that I would even read something other than the Bible. But no one threatened my life because I mentioned a satirical novel about God during our bible discussions.

Some people did anoint themselves to run me out of the church because I thought differently about God. That took 13 years to happen, where I suffered more than Job did in either the Bible or the Heinlein novel. I’m thinking about writing a satirical account of my misadventures as a Christian in modern-day America. That might offend some people.

I’ve published the controversial Charlie Hebdo cover on my blog because the mainstream media is too afraid of the Islamic terrorists. If this offends you, please leave a comment below or send an email to chris at cdreimer dot com.

Read on the Smashwords blog that PayPal is forcing the removal of erotica ebooks from the marketplace with themes of bestiality, incest and rape. Although I didn’t receive a notice to remove my short story ebook, “The Unfaithful Camera,” I did send off an email to the Smashwords support team to find out if I should remove it on my own.

My short story is about a little boy who comes home angry because his father didn’t pick him up from school, finds his father and 16-year-old sister doing the “bouncy-bounce” in bed, and uses the camera on his sister’s cellphone to send a video to his mother to prove that he wasn’t lying about what he saw in the past. While the theme of incest is prevalent in the story, the focus is on the little boy reacting to an unfair family situation. The description for the “bouncy-bounce” scene is mild and a little more explicit than the incest stories in the Bible.

Among all my short story ebooks published to date, this is perhaps my most “controversial” ebook. Most readers don’t read it because of the implied incest theme in the ebook description. The few who have read it sympathized with the little boy’s family dilemma, which probably isn’t that uncommon these days. This is the only ebook I have  on Smashwords that has a rating (three stars, “cute short story”). Readers may soon no longer have a choice on whether or not to read my borderline incest short story ebook. If censorship in Corporate America taught us anything, the axe wielded with a heavy hand leaves nothing untouched.

Updated 03/04/2012 — My borderline incest short story ebook is staying on Smashwords for the time being since the incest content is “incidental” to the main storyline. This may change if PayPal decides to impose a broader ban against bestiality, incest and rape, forcing Smashwords and other ebook retailers to pull such ebooks from the virtual shelves. If a broader ban goes into effect, this short story is history, and, ironically, I might have to find a print publisher for a science fiction short story that I’m writing about a human police officer investigating sex trafficking on a feline-humanoid planet where sexual behavior between the two species is regarded as bestiality. Print publications have stronger First Amendment protections than ebook publications against censorship.

Updated 03/17/2012 — PayPal got out of the business of censoring legal fiction for ebooks. Readers will decide the fate of my borderline incest short story and not the credit card processing companies. For now, that is. And this will not the last battle over ebook content.