NOTE! A SILICON VALLEY WRITER (2008-2016) is a retired blog that is no longer updated. Return to main site.

J.K. Rowling’s newest novel, “The Casual Vacancy,” has received mixed reviews. Mostly because it’s not a Harry Potter novel and has very naughty words that you don’t expect a children author to use. Never mind that the new novel is for adults, read by adults, and spoken by adults who tend to use very naughty words when they don’t think the kids are around (“Oh, fudgemuffian!”). The real issue is that Rowling’s has a second novel problem.

Yes. Seven books in one series. Obviously, Rowling got over the second novel problem in the Harry Potter series. If the second book wasn’t published, books three through seven wouldn’t exist, the movies wouldn’t be made, and we fanboys wouldn’t be ogling Emma “Hermione” Watson on the October 2012 cover of Glamour magazine.

If the new “adult” novel sells out the two million copy print run, she can continue to write more novels and put Harry Potter on the shelf for good.

If the print run ends up on the remainder table at bookstores, she will have two options: keep writing what she wants to write but not publishing it, or return the world of Harry Potter like Sir Arthur Conan Doyle did after killing off and bringing back Sherlock Holmes from the literary graveyard to satisfy popular demand.

I suspect Rowling will become the next Stephen King and write whatever she wants. God knows that King had put out a lot of fudgemuffian in between his more notable novels over the years. The forward momentum from his past successes guarantees some success for his newest novel. Even though his once formidable audience has dwindled away as he went from horror meister to literary master in honing his craft and staying fresh. A day may come when he too might continue to write but not publish.

Then again, even King went back to his Dark Tower series to add an eighth novel, “The Wind Through The Keyhole,” to his seven-novel magnum opus. Not as the sequel to the old series and the beginning of a new series, but a new story among the stories already told. I wouldn’t be surprised if Rowling does the same with Harry Potter. Someday.

This week is the 75th anniversary of “The Hobbit” by J.R.R. Tolkien. I actually had to check the Wikipedia article to confirm that the publication date for “The Hobbit” was, in fact, 1937. (“The Lord of The Rings” wasn’t published until after World War II in the early 1950’s.) Since the trailer for the new movie has been airing on the big and small screens, I also had to check to see that “The Hobbit” had 13 dwarves with so many similar names. I have read “The Hobbit” once as young child and again as a teenager, and LOTR once as a teenager, but that was 30 years ago.

As an eight-grader, I read “J.R.R. Tolkien: A Biography” by Humphrey Carpenter for a book report. My Language Arts instructor warned me that it was a difficult book to read. And it was, but not because of the language. (I would later be tested that school year to have a college-level reading comprehension even though the school system had me classified as being mentally retarded and an idiot to boot.) I had no historical framework of the early 20th century to put everything into perspective. When I read the biography again a few years ago, everything fell into place as I’ve been reading extensively about history and literature in that time period. My instructor gave me an A-grade even though I only reported on the first one-third of the biography.

Would I read the books again now that they are available as ebooks? Maybe, maybe not.

I was never a serious J.R.R. Tolkien fan. Perhaps the language was high-brow for my taste. I’m more of a David Eddings fan, having read “The Belgariad” six times and “The Malloreon” three times. The language in these two series are low-brow for sure, especially since I want to take a red pen to cross out all the adverbs in the early books. I like my fantasy down to earth and away from the ivory towers of academia.

Some writers on Twitter were discussing about other writers who priced their full-length ebooks at $0.99 USD, therefore ruining the market for ebooks priced at $2.99 USD or higher. I kept reading that pricing ebooks at $0.99 USD doesn’t work. Actually, it does work—for SHORT ebooks featuring short stories and essays. The $0.99 USD price point appeals to IMPULSIVE SHOPPERS who want a quick read for a buck.

I stumbled upon this pricing scheme by accident when I became frustrated that the short story reprint market was dead. My short stories saw print once and only once. Placing my reprints elsewhere became too much work. All the editors wanted new content. The few editors willing to consider reprints were so damn picky I’m not sure why they bothered. Unless you’re selling books like Stephen King, a traditional publisher won’t even look at a short story collection.

My reprints found new life as short story ebooks in late 2010. Due to the short length (my minimum word count is 1,000 words), these SHORT ebooks could only be priced at $0.99 USD. Since then I started adding more short story and essay ebooks to my catalog. My income from Amazon and Smashwords grew with every little sale to become a predictable income stream that was larger than my first serial right sales.

My current business model is to add a new SHORT ebook every other week. I should have 40 SHORT ebooks for sale by the end of this year. Most will be at $0.99 USD, some will be FREE, and the omnibus ebooks will be $1.99 USD or higher. The more SHORT ebooks I have for sale, the more sales I’ll have.

This business model isn’t risk free. I’m putting time and effort into a business model that is nothing more than throwing mud at the wall and seeing what sticks. I really don’t know what will work and what doesn’t work. From what I learned so far—reprint sells better than original content, essays sells better than short stories—I can make reasonable readjustments over time to gain more sales.

The serious downside of having too many ebooks available for sale is when the newest generation of ebook readers require high-resolution covers to take advantage of the high-definition displays. Updating the ebook covers over the summer put me into the hole for $300 to $400 USD (still working on this project), wiping out what little profit I had for this year. The uniform covers and formatting should spur an increase in sales.

What annoys me the most with having too many ebooks for sale are the whining reviews that the SHORT ebooks are TOO SHORT. Never mind that word count listed in the description. Never mind that the SHORT ebooks area available for FREE. (I have yet to see a whining review about a paid SHORT ebook.) This is almost as bad as writers complaining about how other writers are pricing their ebooks too low. 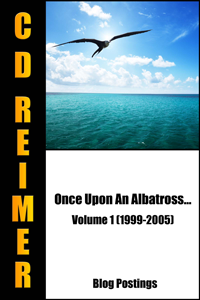 As I finished preparing my newest ebook, “Once Upon An Albatross… Volume 1 (1999-2005),” I looked forward to being done. I wrote this batch of blog posts from my personal blog long before I became serious as a writer, when the concept of blogging didn’t quite exist, and my grammar usage was horrible.

In short, this wasn’t my best writing.

The process of cleaning up individual posts for the ebook became a laborious task as I had to update the website with the revised content (a little side project that I put off for the last four years). Many early posts got deleted as irrelevant or nonsensical, broken links updated or eliminated, pictures re-sized and moved to the portfolio section. For a website that started off as a dial-up Wildcat! BBS in 1995 before something called the Internet became popular, I still have seven years of content to go through.

When I uploaded the completed ebook file into Amazon and Smashwords, they both presented me with a different technical issue because the ebook file size was too big. I wasn’t sure if I should laugh or cry for being dinged from opposing sides.

Amazon refused to allow me to set a minimum price of $0.99 USD. The price was meaningless as my blog postings ebook was FREE. (Amazon will price match to FREE when my Smashword titles are available on Barnes & Noble and iTunes for FREE.) Clicking through the various info links that Amazon provided, I had to set the minimum price to $1.99 USD because the ebook file size was greater than 3MB. That I couldn’t change without removing all the pictures from the ebook.

Smashwords refused to upload the ebook file because it exceeded the 5MB file size by a half-megabyte. Using Microsoft Word to compress all the pictures in the ebook file didn’t work because I made all the adjustments in Adobe Photoshop. I ended up deleting eight pictures that were visually redundant to get the ebook file size under 5MB.

The file size is something to keep in consideration when incorporating pictures into an ebook. If this becomes an issue again, I might select a handful of pictures for each blog post and provide a link back to the corresponding portfolio page.

Almost every Sunday afternoon from 12PM to 3PM PT, I’m tweeting about writing and ebook publishing with the #writechat hash tag. Last week, after a spirited discussion about a variety of issues, @domynoe tweeted that she gave me a “+K” about writing on Klout. That left me stumped. I’ve heard about Klout before but I didn’t have a Facebook account for the same reason that Facebook went public: I couldn’t figure out the privacy settings.

I’m a moderate conservative in California, which is an endangered species in this very blue state, who supports President Barack Obama. Besides, most Californian Republicans stayed home from the GOP convention in Tampa, Florida, as a hurricane is real weather that is scarier than a swarm of earthquakes.

About 75% of my Klout score is writing. Not surprising since that’s biggest soapbox that I stand on week in and week out. The other subjects that I have influenced on are all offshoots related to writing. Except for the odd assortment at the very bottom, which are the topics from my personal blog.

What good is Klout to a writer? I’m not sure. Again, I had frequently heard about Klout but never got involved with it until now. May be more useful for me as a blogger on what non-writing areas I need focus my influence—or, lack thereof. Beyond that, I’ll let you know in a future blog post when I find out more myself.