NOTICE! A SILICON VALLEY WRITER (2008-2016) is a RETIRED BLOG that is no longer updated. Click here for main site.

I came across two tweets last week about artists using Kickstarter to fund their projects. If you’re not familiar with Kickstarter, it’s a social media website for hosting creative projects, setting a minimum funding goal, and offering various incentive levels for people to make pledges. If the pledges meet or exceed the funding goal within 30 days, all the pledge backers will have their credit/debit card charged to fund the project. If not, the project isn’t funded. This is a very clever mechanism for funding creative projects. The tweets illustrated the wrong way and the right way for setting up a Kickstarter project. 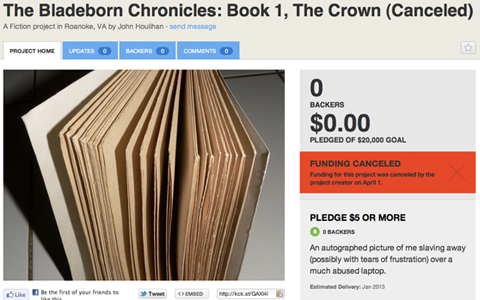 An unpublished writer wants to self-publish his unwritten epic fantasy novel for $20,000 USD.

[…] I will be working to create an epic fantasy. There will be warriors, wizards, possibly a damsel maybe a dragon or two, fights, and of course, mead. I’m planning to self-publish, which means that there will be many additional costs. Printing of the books (as I intend to have a limited print run), marketing, editors, more editors, the list goes on and on. That’s where Kickstarter and you come in. Your pledges will be used to fund all the minutiae involved in self publishing, like the purchase of ISBNs, having the formats converted to work with all the different readers, and other assorted minor costs. Also, these pledges will go to the larger costs as well, like the cost of editors and marketing. In all, these pledges take this self publishing dream from something that might be fun, but not truly profitable, to something that might make enough money on this first book  to allow me to move to writing as a full time job, once this book is published, instead of something I do when I have the time.

The rational for this project seems absurd. Give money for an unwritten novel from an unpublished writer without an outline and/or synopsis in hand? No, thank you.

Perhaps I’m biased from my experience as a short story writer. I had 200 rejection slips before my first short story got accepted for publication, another 100 rejection slips before my second short story got accepted, started publishing regularly in the genre anthologies not long thereafter, and recently started publishing my own essay and short story ebooks. That’s six years of hard work to develop my talent, learn the business and be somewhat successful. I’m still a few years away from quitting my tech support job to write full-time.

What made this unpublished writer so special that he could solicit money to write full-time without proving he’s capable of doing so?

Kickstarter allows you to send private messages to the project owner to ask questions. The lengthy reply that I got back to my question was that the bulk of the money would go towards editing and marketing as these are the two areas for why novels often failed to break out.

Having written a sprawling 700-page rough draft for my first novel (a postponed but not yet abandoned horror/urban fantasy/OMG-WTF-BBQ story), editing is a daunting and relentless task. This is why most epic fantasy writers sometimes go for years between publishing books. You shouldn’t bother with professional editing until your manuscript had gone through two or three drafts and spit polished to the best of your ability.

You shouldn’t worry about marketing until you built up your author platform via website and social media to establish yourself—the writer—before an audience. No brand, no audience. No audience, no pledges. At the time of this writing, the project had no pledges to get funded with. If you’re careful in laying down the ground work before your publishing your novel, the marketing should take care of itself.

An epic fantasy novel ebook with professional editing, cover art and ebook formatting can be done for $2,000 USD.  I would recommend that the project owner write his novel—and build up his brand in the meantime—before coming back to Kickstarter with a focused plan to turn his novel into an ebook. If done right, the pledges will come in. And even at $2,000 USD, success will still be a long shot.

UPDATE 04/13/2012: The project owner cancelled the project on the same day that this blog post appeared, which, presumably, was purely coincidental. A wise choice given that the project failed to attract any pledges after two weeks.